The Waterloo Tigers held their year end banquet on June 5th to celebrate the achievements of all competitive teams. The event was held at Conestoga Place where each team gathered with some of their special guests.

Congratulations to our 2017 Award Winners! Should you have any pictures of these award winners, please send them to WaterlooTigersVBC@gmail.com.

COACH OF THE YEAR:

PLAYERS OF THE YEAR:

The Ontario Volleyball Association hosts an annual banquet to honour those who have distinguished themselves by providing their time, effort and support to the promotion and development of volleyball in the province. The banquet, known as the OVAtion Awards Banquet was held on June 3rd, 2017, presented several awards to various coaches and athletes for their achievements throughout the year.

The Waterloo Tigers was the 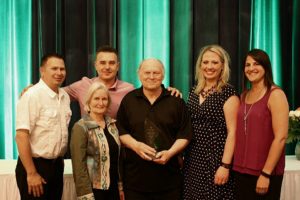 recipient of the Doug Robbie Volunteer of the Year award for their impact on the promotion and development of volleyball for the OVA at the regional or provincial level in the past year.

In addition to this prestigious award, two of our coaches were presented with a Recognition Award which is presented to an individual who has been involved in the development of volleyball at the club or provincial level for 5 years or more. Congratulations to Pierre Baril and Marek Gwozdz.

The Tigers 15U Black team travelled to the heart of Pennsylvania to participate in the Happy Volley tournament hosted by the Penn State University.

After a successful Saturday of play, the Tigers 15U Black team competed in the Gold bracket against some very tough teams. They played some of their best volleyball against tough opponents.

On Monday, in the final day of competition, the quarter-final game pitted them against the 2nd ranked team in the 15U Club category – and beat 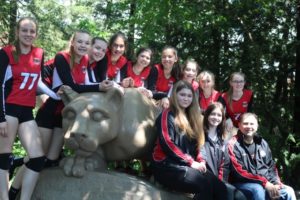 them in 2 straight sets.  The semi-final game was against the team that won the Pool on Saturday.  This match up was close as they forced a third set but was a little overpowered by them.

A 3rd place finish in the Gold Division was an amazing accomplishment for these girls, finishing with the same rank as Storm Ice from Aurora, and played very well against the top 2 teams in the competition.