The 14U Apex team travelled to Brampton to play in their first OVA tournament of the season. The team battled against the 15U Black team in the first match of the day losing 22-25, 17-25. They played Galaxy B in the second game of the day winning 25-8, 25-18. The girls played a hard battle taking it to a 3rd set in quarter finals against Cambridge Scorpions (21-25, 25-14, 12-15) but was defeated. They saw Galaxy B again and were victorious in capturing 5th place (25-20, 25-20). Good luck next weekend at the Tigers Invitational 14U tournament. 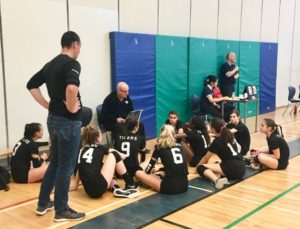